We went to Florida this year for a trip to Disney's theme parks and unfortunately, we were really disappointed. Covid and the resulting pandemic has changed a lot of things down in Florida, including pretty much every normal practice at all the Disney resort parks. Gone was fast pass and going to the park any day you want. In it's place was a flawed reservation system that is backed up for weeks...for certain parks. 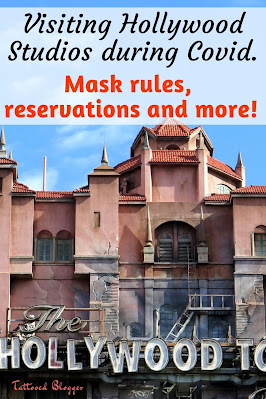 You don't have to take it from me though, you can read the hundreds of bad reviews on the app! I mean, a lot of the things you'll experience are common in lots of public attractions now. Capacity limits, temp screenings, mask rules and hand sanitizer stations everywhere.

Unfortunately we didn't even get to go to the park we wanted to because of the flawed reservation system I mentioned earlier. I will explain the rest of our experience though.

Although all the parks were open, we decided not to go to the Magic Kingdom this trip. Too many attractions and restaurants were closed or cancelled and recent comments on social media and images posted online showed long lines once again, despite lowered capacity. This is in part due to no longer using the fast pass system.

You can see a list of which attractions are closed at each park on The DisneyGo Website. Just choose which park you want and check out attractions, restaurants etc. Unfortunately the backstage tours at MK is cancelled right now and that is on my list for next time we go back. In pre-Covid days you could simply show up to the Disney park you wished to enter, pay your money and go in.

Now though, you need to make a reservation through the Disney app I just mentioned.

Using this system means you have to buy your tickets, load them to your account (or buy them through your account) then make a reservation. However, all parks have a lowered capacity and certain ones hit it almost daily. Generally those parks are Magic Kingdom and Hollywood Studios.

If you don't make a reservation in advance, you may get to Florida and find there are no reservations left in the park you wish to go to. Such will probably be the case in Hollywood Studios as this was the schedule for December 2020. We went from the 3rd-10th with the sole intention of visiting Hollywood studios...since it was impossible to get on the new Star Wars rides back in January when we were here last.

This was the availability for all of December, checked on the 1st. You definitely need to book in advance, even if the month you're going is normally low traffic. 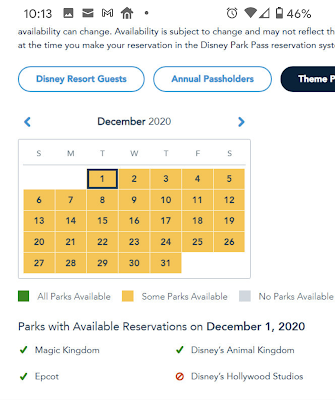 Unfortunately for Star Wars fans, even if you manage to get a reservation in to Hollywood Studios, you may not get on the Star Wars rides as they are not running off lines AT ALL! That's right, only these rides in the entire Disney Parks system are taking reservations...fast pass if you will.

However, the que for the lines only opens at 7am and 2pm and are usually full by the time you can hit refresh on your app!

I talked to several people who got into the park and did not get on the rides even though they were in the park and on the app trying to get a reservation at the right times.

I talked to one guy who had been to every park but Hollywood studios even though he had made several reservations for that park weeks in advance. Unfortunately he could not get a ride reservation at 7am each day that he tried, from park property. He would switch his reservation to another park, hoping to get into Star Wars the next day.

This is definitely the most unfair system Disney ever created. Admittedly, it is not a Covid thing as this is the reason we did not go to that park in January when we were in Lake Buena Vista. All the reservations were filled within seconds of the 7am open time. That is all the reservations for the entire day, and no line waiting option!

Disney has really screwed people over on this one. I've talked to many people that would have gladly waited in 2-3 hour lines to just experience one of the Star wars attractions but could not get on at all! This is what is called bad user experience. Especially after people travel and spend thousands of dollars to stay at Disney's resorts.

Disney has no intention of changing it though, as they would like people to come back to that park again on their next visit to see what they missed. Universal studios has the lowest yearly attendance of all their Florida parks! The Star Wars experience has been a much needed shot in the arm for that park.

Actually, the only person I talked to that did experience the entire attraction was an employee at our resort. He had been invited to a pre-opening event. We did not stay on Disney property (never do) and as such our resort experience might be different than yours.

Resorts near Disney during Covid

Our particular resort had 1 of 4 restaurants open. Everything that remained open had shorter hours. Some of the pools and all of the hot tubs, the saunas and steam rooms were closed. They also were at a lowered capacity.

People I spoke to at other resorts had the same experience. We do understand! You can't afford to run all the facilities/stores/restaurants at resorts when they are close to empty! Another problem resorts are having is finding employees at this point in time. I was told by a resort manager that most of their staff when called back, had to decline due to health issues.

While we understand, most travelers would prefer full disclosure before planning their trip. However, with the constantly changing mandates and rules, that would be practically impossible to predict when planning a trip in advance. 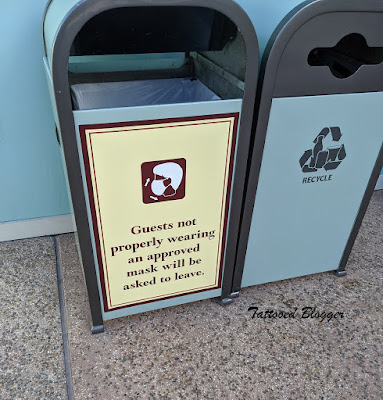 One place we spent a good amount of time was Disney Springs. They have only 1 garage open and everyone must be temperature tested and then purses searched, which is new. We walked through metal detectors too, which is also a first there.

The first day we tried to go to Disney Springs was a Friday and before we even got near the Lime garage, huge construction size signs flashed the message "Springs at Capacity". So my advice if you try to go on a weekend is to go earlier in the day, since lots of people go there for dinner.

Each business in DS had a lowered capacity. They all had signs near the door about masks and sanitizer dispensers in various locations. Many store had one way in, one way out and people counting visitors at each.

Some stores like Pandora, gave each customer their own sales person to help them select their items so they weren't wandering all over the store. There were plexiglass hung in front of sales registers in almost all the stores. It was pretty much like any mall during Covid, actually.

We are normally at the parks more, so this trip we spent time doing new things. We went mini golfing and fed the gators at Lost Caverns Adventure golf, which was a lot of fun! We stopped at the outlets briefly and found a drive through called Pollo Tropical which was so good, we went twice.

We made our regular trip to Universal Citywalk for Voodoo Donuts, chocolate and margaritas! Pro tip: if you're only going for dinner or nightlife, go after 6 because parking is free. Mask rules, lowered capacity on the whole and at each store/restaurant is enforced.

All in all it was a fun trip though we are really disappointed that once again we did not get to see the Star Wars exhibit. Maybe next year.

at December 30, 2020
Email ThisBlogThis!Share to TwitterShare to FacebookShare to Pinterest
Labels: Disney Parks