I might be having a midlife crisis. I bought a boat. The funny thing is I had thought about this for quite awhile and even took a test drive on the lake last year, then decided not to buy a boat. I literally said "Is this all it does?" while on the test ride! Then this year rolled around and I bought a boat. A 20 foot long Berkshire pontoon boat to be exact. 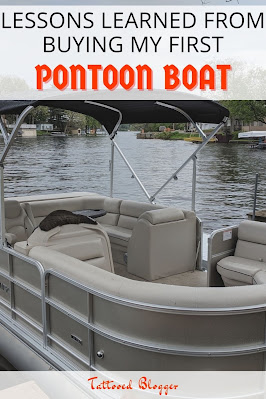 Our house is on a small somewhat quiet lake. It's 506 acres with a maximum depth of 80 feet. It has a public boat launch, though really only about a dozen vehicles and trailers can fit in the lot. There's maybe 60 boat slips in both the marina and on small pieces of land where people rent out dock space. Otherwise, everyone else on the lake are people who actually have houses on the lake.

it's called Lake Orion and it's in Michigan.

So it's not really a big busy lake. Most people have pontoons on this lake. There's a speed limit of 45 on the water, so there's no need to have a fast boat anyway! We can barely get going with the jet skis before you have to back off the speed. Both the sheriff and local cops are out all the time too, so it's a fairly slow pace cruising around the lake.

We chose a pontoon for many different reasons. As mentioned earlier we have 2 jet skis, so a cruising boat was really what we wanted. We don't have little kids anymore but we do have a big dog and we needed room for her. We wanted something friends and family could go out with us and the boat capacity is 10 people.

We also wanted something we could spend time on, and be able to spread out...not be cramped in seats and have to come back to the dock to sunbathe or eat.

I chose a pretty simple package because it was my first boat and I had no idea how much we'd actually use it. I'd either find out we were on it all the time and would want to upgrade in a few years (they hold their value well!) or would find we never used it and would be glad I didn't blow a ton of money.

Anyway, boat ownership was a whole lot different than I expected! I mean, I knew that I was going to have to pay for different things it would need, but there was a lot I didn't expect. Here are all the things I learned while buying and owning my boat this summer:

I bought a pontoon boat which uses an outboard motor. Those are 2 separate purchases and they both need registered separately! A trailer doesn't come with the boat and if you decide to get one, that gets registered on it's own too.

Many boat owners don't have trailers, actually. I'm sure I looked at the guy like he was crazy when he asked if I wanted to order a trailer! How else was I supposed to get the boat moved around? Turns out there are companies that pick them up off the water in fall, wrap and store them in winter, then un-winterize and bring them back to the water in spring.

I didn't get a trailer after all.

At least in our state you don't, unless you are under a certain age. The young adults in the family all took the watercraft safety course online so they could drive the jet skis or boat. I think it was $30. I did not have to take it and many other states don't require them. It's not a bad idea if it's your first time operating a watercraft, because they do teach you some water safety.

In many places though, a boating license isn't really a thing. 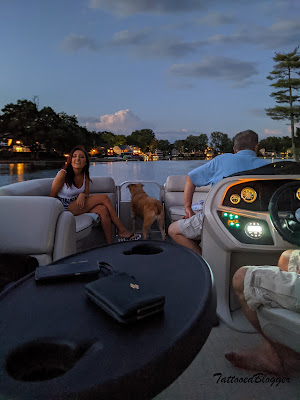 Regular gasoline cannot be used in outboard motors because the ethanol content is too high. Marine gas at the marina will usually be about $2 more a gallon than normal gas. If you don't mind hauling the gas and handling gas cans, you can pick it up at the gas station for a bit less. It's still more costly than car gas though, although you wont go through it nearly as fast!

The first oil change I had done on my boats motor was around $160 which I thought was ridiculous! Not only is the oil and filter more expensive than say a car/truck, but the process takes much longer. Luckily it only needs done about once a year for average boat use, but still... Oh, and boats count by hours, not distance. Oil should be changed every 50-100 hours.

Right after I ordered the boat but before it came in I had a moment of panic. I saw this funny T-shirt on some boat site that said "I'm sorry for what I said when I was docking the pontoon!" Instantly I started worrying about slamming the boat into the sea wall or the dock. I refused to dock it the first 2 weeks, then was a literal mess the first time I finally docked it.

I shouldn't have worried...it's super easy!

Normally you'll have someone on the boat with you, and they will help when docking. Boats float, right? So you just float it in, cut the motor and as long as your within grabbing distance of the dock and you're coming in S-L-O-W-L-Y, they can just pull you in and straighten you out. You can stand on the dock with your hands on the boat and maneuver it however you want and it weighs almost nothing because it's floating.

It's even easier of you're docking on the same side as the captains seat! Our dock is on the opposite side, and it's still pretty easy. Definitely don't worry about docking!

Where people sit on the boat matters

This gave me a little fright the first time it happened. We had some family over to go for a boat ride and everyone was sitting in the seats up front and I was driving. My husband stood up as I pulled into dock and it was 4 grown adults in the front of the boat and him near the side door. There was nobody but me from the middle to the back of the boat. I felt the front of the pontoons scrape the lake bottom!

Then of course some one flew by on a ski boat and the wake made it bounce off the bottom a few more times! Ugh! This is also a problem if the front is heavier than the back and we're cruising along fairly quickly and cut the motor too suddenly. The front of the boat will drop down and the water will roll over the front of the platform and onto the boat. Scares the crap out of anyone up there too! lol

We found out that we use the boat all the time. I mean, every single weekend! Now we're thinking of getting a bigger one, but I think I want to hold off for a year or two...just to make sure it's not a case of playing with the new toy!

Related reading: Check out the Flame like Solar Lights we got for our dock!