If you've been around Pinterest at all, I'm sure you've seen the ballet flats with the blue bottoms. Their called Tieks and while they are pretty expensive, they're touted as being worth every penny. So many Tieks reviews have been written talking about how amazing these shoes are. So of course I had to try them and find out! 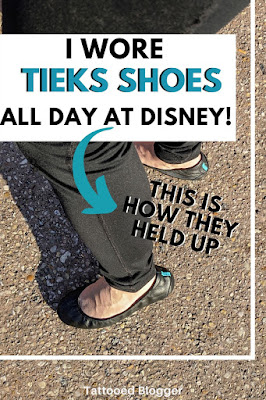 One of the first things I did was check out the Tieks by Gavrieli website and see if they have an affiliate program. They do not. Which means that all these bloggers were buying these shoes on their own! No discount, no kickback for sales from their posts. Now that is interesting! Especially considering that many bloggers do get stuff for free, so why would they spend almost $200 for a pair of shoes they couldn't make their money back on?

As I mentioned earlier these are rumored to be THE most comfortable ballet flat out there. So now I gotta know just how comfortable these shoes are. I ordered a pair. 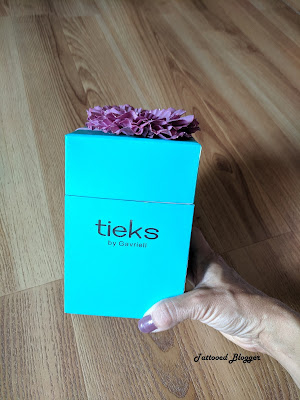 When you head over to the Tieks website you'll see that they have lots of colors to choose from but only one style. At my last count there were 76 different colors and 5 of those are considered vegan. There are also 3 colors in girls sizes. The prices start at $175 and go up to $345!

The single style they carry is the ballet flat. As mentioned before they come in various colors with teal blue 'pads' on the outside of the chocolate brown sole. They have a strip of blue up the back of the shoe.

At first I thought it was really weird that the sole had these pads on it, then I read that they were like this to give the sole of the shoe more flexibility and comfort. Tieks are built to mold to your foot and flex when you walk. The back of the shoe is cushioned rather than elasticized to ensure they're never too tight on your heel.

This all makes these shoes sound amazing but can they really be that great? I decided I was going to give my shoes a workout by wearing them to Disney World. The whole day!

Before we get to Disney, let's rewind real quick though and get back to my order. I decided to order the matte black. I figured I wanted them to be as versatile as possible and black matches everything, right?

What comes with Tieks shoes?


They arrived in a Tieks blue box with a pretty fabric flower on top. Inside the box were the shoes, a small black carrying bag, a blue carrying bag and a little personalized card. I thought the card was a nice touch.

I don't think I'm explaining this right...I'll get pictures! Tieks fold in half completely. The back of the shoe then folds over the toe and they stay that way on their own. This is because of those two pads on the bottom instead of a solid sole. It offers much more flexibility. It also makes then easy to throw in your purse for whenever your feet get sore or tired wearing heels!


Now let's get to Disney! My day started at the main entrance and ended on the tram back to the car. I'm not gonna lie, they did hurt a bit. By the end of the day the ball of my right foot was hurting. Almost like my foot was part on and part off of the blue pad. I could feel the edge of it with the bottom of my foot as I stepped down. I had worn the shoes for 12 hours at this point.

I kept them on till we got back to the condo and took the following pictures as soon as I took the shoes off. As you can see I had some redness on the skin of both feet. However, there were no blisters! The redness went away pretty quickly and the soreness was also gone shortly. 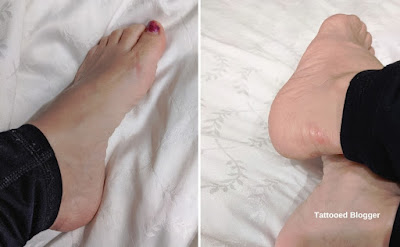 The next day I had slight soreness under the ball of my right foot, but otherwise my feet did not feel like they walked around a theme park for 12 hours! They were almost normal. I've worn the shoes many times since then for up to 10 hours and have had some soreness with them. Mostly it's under the ball of the foot, where the blue pad meets the sole.

Are Tieks worth it?

Are Tieks worth around $200 a pair? I don't know. I would say that if you need to be on your feet all day and would wear them a lot then yeah. They could definitely be worth it, especially if you have a hard time finding flats that are comfortable.

I think it's utterly amazing that after 12 hours I did not have blisters, even though my feet had clearly had enough at that point! I think it's also worth noting that I'm 48 and my feet get sore much more easily than when I was younger. My daughter wants a pair next, she's 25. I'll update this review to add her opinion if she gets a pair too!


We go to Disney almost every year. Here are the Best attractions for adults at Disney.!