This post is sponsored by Brand Backer and Litter Genie.

I'm sure you know I have a cat because I've talked about her here with different products. What you don't know is how much I hate litter smells. I don't want to have a kind of house that people walk in and go "oh you must have cats". Embarrassing! So cat litter odors are something I obviously have to deal with daily.

I also live in the woods, so it's quite a hike down to my garbage can at the end of the drive every day to dispose of freshly soiled cat litter. Luckily, we found a solution recently. 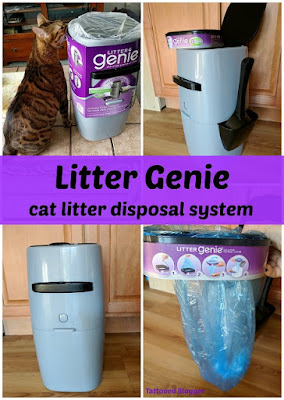 Litter Genie helped me to tackle that problem this month when they sent us a Litter Genie Cat Litter Disposal System to try out. The first thing that struck me about this system is that it's very modern looking. I can put this anywhere in my house and it doesn't look like something that's got cat poop in it. It just looks like a modern style garbage can.

The next thing that struck me as interesting was that it's very similar to a diaper disposal system. If you've had a baby in the last 20 years or so you've seen the diaper pails where you stick a diaper in and it seals it in between each one. Basically they've done this for cats.


It's sort of a two step system. First, there's a lid that you open to put your cat litter in. Once you put the litter in, it's in the bag but on top of a sliding door which is shut so the smell from below does not get out. That sliding door keeps all the cat litter that you put in there (and it's stench) locked beneath the surface.

After the cat litter is in the pail you shut the top but then you open that little slide door and the litter falls down inside the pail. Once you let go it closes up again and the smell can't get out. Neat, huh?

It's actually pretty impressive how well this keeps the cat poop smell from permeating the bag and the system. I can be standing right next to it, even when it's full and not smell a thing! We couldn't believe it. Even Trixie checked it out! 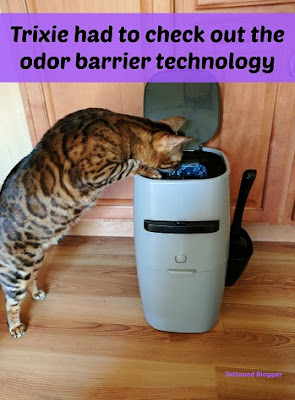 The Litter Genie Pail holds up to two weeks of cat litter (for one cat) at a time. Once full simply press the button on the front to release the lock and lift the top up and back. It has a convenient cutter inside to cut the bag. Tie the bag and remove it from the system. Then tie the remaining bag liner and pull it down to make some space for the new litter. Close the system back up and you're done.

Additional refills can be found in stores or ordered online (yeay for automatic Amazon shipments!) You can also buy them in Walmart, Petco and many other stores too. I'm in the middle of nowhere, so I'm getting those automatic shipments. Each regular sized refill should last 2 months with 1 cat.

Trixie and I are both glad we got to try the Litter Genie system, it's easy to use and really cuts down on litter box smells.

This post was sponsored by Brand Backer and Litter Genie.
Want to be 'in the know' the moment a new post is published? Sign up for my newsletter right here and I'll email you with every new post! (maximum once a week!)

This post contains affiliate links. If you chose to purchase something through the link, I will get a small payment from Amazon. It will not affect your purchase price. Click for full disclosure.
at May 14, 2017
Email ThisBlogThis!Share to TwitterShare to FacebookShare to Pinterest
Labels: pet products