Weddings and kids: is it selfish to say no?

I recently read something online where a woman basically whined and fussed because her kids weren't included on the invitations to a few summer weddings. I was surprised because it's really not uncommon. Her point was that after the first wedding or 2 it got expensive to pay $100 a night for sitters, gifts and such so hubby and her could attend without kids and it was SELFISH of the bride and groom to expect her to. 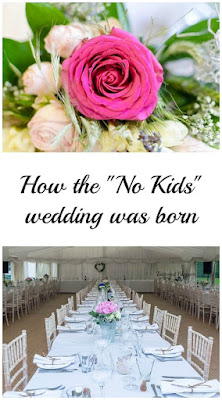 That's what I kept telling myself as I read it. Why? Well, this woman expected the bride and groom to submit to her on their special day. To pay several hundred more to the caterer so her kids could attend. Maybe even set up separate tables or hire a babysitter. Apparently it's more important that this one guest be happy during the event then they are. Wait, what?

This post got grabbed by social media and I was thrilled to see that most of the commenters agreed with me. They ranged from the simple "whoever pays, says who's invited" to the more complex "etiquette says that the gift should mirror the dinner cost. Most weddings are around $100 per plate so if a couple goes the gift should be $200 but if 2 kids also go it should be $400."

That point kind of defeats the $100 sitter cost doesn't it?

People worried about drinking, expensive crystal, inappropriate (drunk) dancing, kids making noises during the ceremony, getting in the way of staff and on and on. There really were tons of valid points. There were also a ton of 'weddings are about family, kids should be there' comments too.

Other people thought the writer was picking and choosing which weddings she was going to and "blaming" the no kids rule when she obviously was ok with getting a sitter for certain events but not others.

Through all the arguing were the voices of some parents insisting their kids would 'never' disrupt a wedding. That they know how to watch their kids in public. Their precious little snowflakes (yes I get how overused this word is right now...bear with me) were perfect and therefore should be the exception.

Let me tell you: they're not. 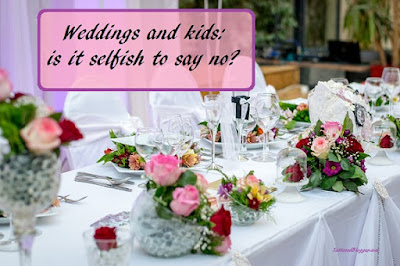 Here's how I know. First up is my 4 years experience as a banquet server and bartender. I've worked several events where someone's kid has stuck their hand in the wedding cake before the bride and groom even arrived.

One particularly active child took the entire container of cherries right off the bar....twice! Play with every stir straw and sugar packet they could get their hands on most of them ending up on the floor. Drop a glass of soda on the dance floor breaking the glass and making a mess that required a janitor with a cleaning bucket and mop in the middle of the reception.

They've knocked over photos on the gift table. Opened gifts from the gift table! Run around the room collecting everybody's favors from their place settings then screamed like hell when mommy told her to give them back. That has happened at more than 1 wedding!

One child stuffed paper towels in all the toilets then flushed them...multiple times! 2 children chased each other up and down the grand staircase till one fell and had to be taken to the hospital. Oh, and don't even get me started about what kids can do to a chocolate fountain in a matter of minutes!

Do I need to continue?

I've spent hours photo shopping out dirt marks on a brides gown where grubby hands touched the perfect white material. I've also spent a ton of time photo shopping a kid out of formal pictures because her mommy said "she'll cry if she's not allowed in the pictures" as the bride gives me the 'help me!' face.

I've watched kids fall on dance floors. I've arrived too late to get a picture of a perfect cake because, you guessed it...a kid already touched it while I was still at the church with the newly married couple. I've done it all with a smile while assuring the bride that I can fix it in editing, and not to worry it'll be fine!

Then there is my personal experience with weddings growing up. You see, my family always had huge everyone is invited weddings. I can't think of one where a kid didn't get hurt, lost or break something.

My own wedding was mostly child free. I paid for a babysitter and pizza at our house and guests were welcome to drop their kids off there. The kids loved it. It cost me much less for a shopping trip to pick up soda and snacks, a few DVD's, some games, a babysitter and pizza delivery then it would have to pay $100 a plate for 12 kids to be at my reception.

Now I have seen many weddings where nothing bad has happened with kids being there, so it is quite possible. Ultimately though, it is up to the bride and groom. No one should try to make them feel guilty for their decision unless they plan on paying the tab for the reception. If you're paying for their wedding then bitch all you want!

Truth is, unless your kids are truly hell on wheels, the bride and groom probably had more important things on their mind when planning their wedding. Like paying for 200 people to eat $100 a plate meals and a $500 wedding cake, plus centerpieces for 20 tables!

They probably looked at the guest list and said "you know, 30 of these kids are under 18...if we just make it an adult only reception we'll save a couple grand" Then the bride said "plus we really don't want kids to see your uncle mooning people like he does every time he's drunk".....and the no kid wedding was born.


Want to be 'in the know' the moment a new post is published? Sign up for my newsletter right here and you'll also get my free Self-Care Sunday guide!

at June 14, 2016
Email ThisBlogThis!Share to TwitterShare to FacebookShare to Pinterest
Labels: Opinion