By now you've seen the advertisements (mostly on Facebook). You hit the ad and a video pops up showing the so called 'inventors' of this miracle product on a TV show applying the cream and the models wrinkles literally vanish in front of your eyes. How can you not want this product? With phrases like "as seen on Shark Tank" and celebrity endorsements it seems like legit product. 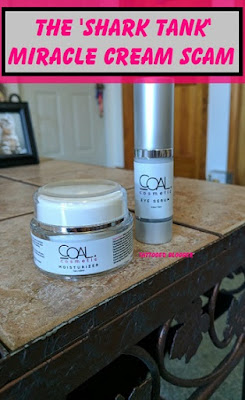 These anti aging creams makes great claims that it reduces bags and wrinkles and makes you look much younger. You literally watch it happen! They offer a "free trial, pay only shipping". Once you order the cream for under $5 it takes you to a page with the eye serum offered for about the same shipping price.

It sounds like a great deal! At no point does it say anything about paying full price after your 'trial' is up or an automatic shipment plan.


Unfortunately, that's exactly what you are agreeing to...full price and monthly shipments. Not only do you owe the full purchase  price if you don't return the product within a short amount of time (I think 2 weeks) but they charge your credit card an additional $1.49 service charge then refuse to remove it!

Then they send you a new shipment and bill you for it, every month after!

My experiences began as so many others have, with a Facebook ad for a product called Coal Cosmetics (there are over a dozen different names they use though, so keep reading for proof!). I cannot stress enough that no where in any part of the advertisements did it say I would eventually be charged full price! I read very carefully thinking there might be a catch but found nothing. I went ahead and ordered the product.

My credit card was charged with the 3 charges, 1 for each product and then that random other charge. The weird thing is, the 3 charges came with 3 different company names and phone numbers attached (see image, click to enlarge). While this was odd, I really wasn't worried too much about that third charge as it wasn't even $2.

The product was supposed to come in 3 days. It didn't come but honestly, I forgot about it. I happened to think about it two days ago and went online to find some info for the company and ended up on their Facebook page.

I have never seen so many angry posts in one place! This where I learned about the recurring charges and the automatic shipments. So I started worrying and started stalking my credit card company and wouldn't you know, this morning they hit my card for $89.69. For something I never received!

At this point I'm fuming and ready to dispute the charges but decided to call the 800-983-8169 number on today's bill and somebody actually answered! The poor guy seemed a bit defeated as I'm sure answering calls like mine all day long is exhausting but he was helpful.

He located a tracking number and said my product was delivered on the 16th. He also said that I did agree and when asked exactly where I supposedly agreed, he didn't know.

He said he would cancel my subscription and since today's charge wasn't completed yet he would refund it however, it would take up to 30 days. Great. He also said he would send me email confirmation but I haven't seen it yet. He did give me a transaction number though. Hopefully it will go through completely.

I went back to Coal Cosmetics FB page to give the number to some of the people complaining that there is no way to get in touch with the company. I started reading complaints. One person claimed that we all agreed to it but it was gray on gray type so we couldn't see it, but it was there.

I decided to go through the order process again to see if it was there. I got all the way up to 'enter your credit card info' and there had been no mention of paying full price after 14 days or a recurring charge & shipment. I also went to the order pages and clicked the TERMS button to see if maybe it really was there all along.

That would be a little sneaky, but still legal. However, that terms button went to a page with nothing on it but: File Not Found. At no place on their website or any of their ads can I find these terms we supposedly agreed to when ordering. I  did however find  a link to these 15 complaints filed with Ripoff Report in the last 4 months.

Currently: When you see a Coal Cosmetics ad and click on the link to order it you suddenly find yourself on a  Lueur Saine Ageless Moisturizer page. Or Prodroxatone Vitamin C Serum. Or Aviqua Anti-Aging Formula. Or Inherent Beauty. Every time I clicked the buy it now button I was taken to a different page!

Every page used the same picture of the same girl prominently placed to deceive you into thinking you're ordering the correct product. The colors used in the ads and the format is identical so if you don't look closely, you won't realize that you're ordering the wrong thing. Oh, and don't forget you're subscribing! 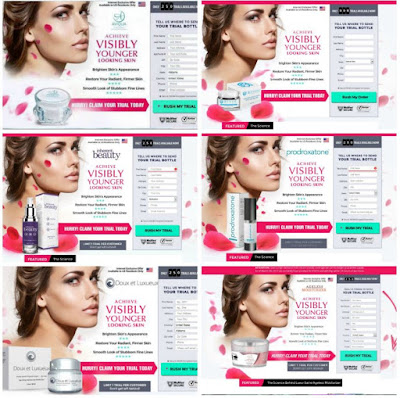 It's also quite suspicious that many of the sites they advertise on have the word Scam? in the post titles. It's almost like they knew that is what people would be searching so they made that part of their advertising to make it difficult to find the real reviews and truth about the company.

If you have to wade through 20 fake reviews that are actually ad's first, it starts to make you think it might be legitimate. Sneaky sneaky!

Was this face cream ever on Shark Tank?

I have to say I was definitely taken in by the ads on this product. The original ad I saw mentioned Shark Tank (which never had a skin cream on it at that point) and the Today show (which does have episodes with skin creams, just not these skin creams!). Hitching up to these 2 big  names made the company seem more legitimate then they actually are and I fell for it.

Along with countless others innocent consumers.

The cherry on top of this ridiculous experience is that I decided that before hitting publish on this post I needed to take a ride through the woods to clear my mind and decide if I really wanted to blast a company like this. I usually have good things to say so this is a change for me.

Once in the garage I find a box sitting on the seat of my Gator. Guess what was in it? I asked my son about it and he said it came Friday. Which still gets it here about 10 days after they said it was delivered. I'm not getting refunded those initial charges so I decide to open it and give it a try.

Now remember this is a product that is supposed to work in minutes, literally right before your eyes. So I try it....and nothing. *sigh* I try the serum, still nothing. I wash my face and try again while fanning my face like the video. Still nothing. I give up. Lesson learned.

If they want this crap back they can have it, I'll even pay postage!